The cold open for “Conduit” must have taken some inspiration from Jurassic Park.  There is a shot of a coffee mug with the coffee starting to shake.  What is happening?  Is a T. rex approaching?  Is there an earthquake?  There can only be one explanation.  Aliens.

A person at the FBI headquarters tells Scully that she and Mulder are forbidden to investigate a case from a tabloid headline about a girl being abducted by aliens.  Aside from being terrible evidence to go off of, apparently Mulder is personally invested in this case as his sister also mysteriously disappeared when he was a child.  Scully tells the agent that she will talk to Mulder about it.  I guess they must have gotten permission to investigate the case after all because after Scully talks to Mulder, it jumps to them exiting a car in Sioux City, Iowa. 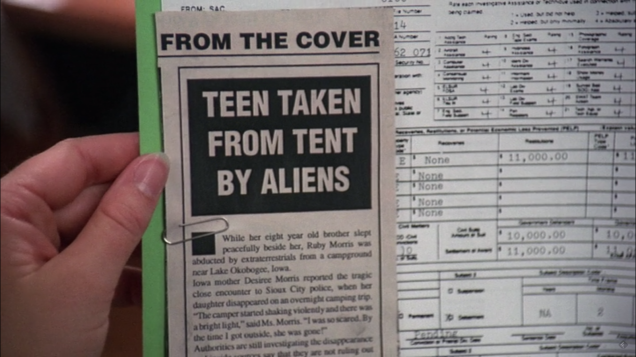 Scully and Mulder come across a child that is handwriting binary code that he claims is coming from the TV.  The NSA gets involved when it is discovered that the binary is a security risk.  NSA agents ransack the kid’s room.  Is it really necessary to go around knocking things off of shelves, destroying piggy banks and tearing off drawings that are hanging on the wall?  The kid’s handwriting must be impeccable because later on in the episode, the code reveals a picture.  I am impressed by the variance in shading of the multitude of 1’s and 0’s.

Most of the episode revolves around a girl that Mulder and Scully find at a library.  It is interesting enough with the interrogations and searching of things.  There is a white wolf that I thought would have more significance, but it was just a white wolf.

The highlight of the episode is at the end when Scully is listening to Mulder’s hypnosis session tapes.  There is just something about the way the audio from the tape plays over the last seconds of footage and into the end credits that makes it feel that something big is coming.