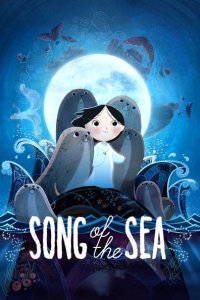 Song of the Sea is an animated film directed by Tomm Moore, the director of The Secret of Kells.  I really need to get around to watching that movie after having watched Song of the Sea.  I was blown away by this movie.  One could say that my expectations were blown out of the water.  For a movie titled Song of the Sea, there really is not a lot of singing.  Instead, we are treated to a touching story that is made more emotional with a beautiful animation style that looks like a children’s book came to life.

At the start of the movie the protagonist appears to be a young boy named Ben who lives with his parents next to a lighthouse.  That is until his mother unexpectedly dies giving birth to his sister.  Time passes and his sister is seen celebrating her sixth birthday.  Ben’s sister, Saoirse (pronounced like Sir-cha) is mute.  Ben likes to rub it in her face that she is not normal.  He doesn’t seem too fond of her because he thinks she is responsible for the death of their mother.  His attitude towards his sister was understandable, but annoying.  Luckily his attitude changes and improves through the course of the movie.

One night, Saoirse puts on a white coat she finds in a closet and goes for a swim.  The coat looks like something Maggie Simpson would wear except with a hood.  This is a magical coat that turns her into a seal, at least while she is in the water anyways.  Night time swimming is viewed as irresponsible parenting by their visiting grandmother and the kids are taken away to go live with her in the city.

The rest of the movie is about the kids running away trying to figure out how to get back home.  The journey isn’t easy when it is discovered that Saoirse is a Selkie, a term straight out of Irish folklore.  Reality starts to become twisted with surreal surroundings that are just a pleasure to watch.

One thing that caught my attention in Song of the Sea that multiple times the movie pans to a shot with a door that has suggestive writing on it.  There are heavy Irish influences in this movie so I checked to see if the writing meant something else in Irish compared to English.  It more or less has the same implied meaning that one would think.  This was a little odd for a PG movie.

Song of the Sea did not see a wide theatrical release in the US.  This is unfortunate as it deserves to be seen.  The movie is available on Blu-ray, but is currently on the more expensive side of releases.  If you are an Amazon Prime member, put that membership to use and stream it.